As Sunel reached his office at 8am, he couldn’t help but notice what a beautiful day it was turning out to be. Looking out his window on the 49th floor, he began to prepare for his coming day. Off in the distance he and a fellow colleague could see that an abnormally low plane was soaring in their direction. They joked that New Yorkers would do anything to get the best view of the city. A few short seconds later, a discombobulating boom shifted the building from right to left. Before anyone could comprehend what had just happened, employees looked at one another wide eyed and in shock. It was September 11, 2001.

At the time Sunel and his coworkers in the North Tower of WTC were unaware they were in the middle of a terrorist attack. Simply thinking a charter plane had accidently hit their building they didn’t move. The building they were in had precautions if there was such an event to happen. The intercom was not going off or any news from fellow managers. It wasn’t until a woman from another floor yelled, “It’s a bomb!” that people began to run down the stairwell. Thankfully for Sunel, the 49th floor ran directly down to the bottom of the building. Over the course of the next hour, Sunel’s life changed forever.

Makin his way down each floor came with new complications. The line of employees trying to get out only grew longer with every second. They knew that those above their floors were most likely hurt or dead. Once he reached the 32nd floor, there was a fire outbreak. Sunel realized there was something extremely wrong when he saw a women completely burnt from head to toe fighting to stay alive. As the lines of people were rushing to get out, he saw a man coming up. He remembers very distinctly the look in this man’s eyes. They were haunting but hopeful. This man, a fireman, was reassuring each of the survivors to keep going and giving them hope that they were going to make it. Sunel explained that he was forever changed at that moment. The eyes of that fireman will be embedded in his memory. Sunel calls these men, along with Police Officers and Armed Forces, “real life superheroes.” They battle evil and disaster for our safety. They put our best interest in mind, and will brave difficult heights to protect America.

As the survivors reached the bottom floor a fireman was pushing them out an opposite way to exit. The fireman was preventing them from exiting the building only to be hit by the body of someone who out of desperation had jumped from the building. Sunel could hear thuds hitting the ground outside the door but never looked to investigate. People were running all around him. Paramedics, police officers, strangers were in union with one another to help the person next to them survive. As Sunel began to run, he heard large booms going off and large pieces of concrete flew his way. Luckily he was not hit. He reached a small store with televisions in front showing the morning’s devastating events. It was there he found out his building was the first of seven in New York to be hit. The World Trade Center was down. Terrorists had attacked. He looked up into the skyline at his office building. He kept switching his gaze from left to right and quickly realized the North Tower of WTC was no longer standing. Devastated and in shock he was finally able to call his wife and five year old.

In the matter of minutes a person can discern what is most important to them in life. Sunel quickly realized that after years of focusing on money that he needed to change his priorities. He now explains that his main focus is God, family, helping others, making awareness and showing gratitude to emergency workers and then money. He stayed in New York a few years after 9/11, and then later moved to Alabama. Sunel explained that his first time driving through Alabama he saw a welcome sign that said, “Alabama the Beautiful.” He knew that it was indeed beautiful, and this was going to be home. He lived with his cousin for a few months in Hoover and got an opportunity to work for Philly Connection. He later bought a Philly Connection in Auburn and since then owns three others. During the anniversary of 9/11 he was contemplating with his wife to close the store down as a remembrance. She suggested that instead of being sad about it, rather giving it a positive outlook and giving free food to Fireman, Police Officers and Armed Forces. This will be his eighth year providing this service to his Auburn location, and his other locations have quickly followed. 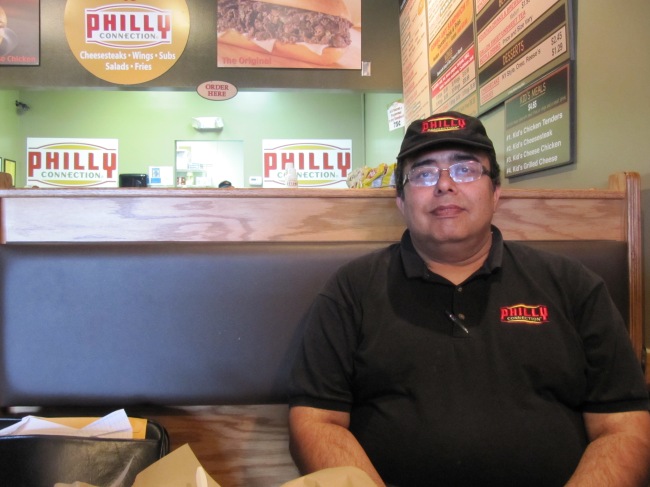 Sunel never would have guessed that an early morning on a September day would forever change the course of his life. There is not a day that passes that he is not haunted by those eyes of that brave fireman walking towards the devastation. It is those eyes though that pushes him, which makes him full of gratitude and gives him a new sense of life’s priorities. It is one day his dream to work at the top of the World Trade Center, even if he has to sweep the floors. This is America. Coming up from the ashes and becoming better together.

*We are so happy to have Sunel and Philly Connection in Vestavia Hills and as a Chamber Member! He is bringing our city awareness to the men and women who fight for our lives daily and his story is inspiring. If you want more information on Philly Connection you can find them here: https://www.phillyconnection.com/